The first impression of Twickenham in the late 19th early 20th century is that of wealth and prosperity, but this was not the case in all parts of the Borough. In the area north of Twickenham Green a large number of Victorian and Edwardian cottages were being built to accommodate the numbers of working class people who were moving into the area to support the many small industrial works, which were opening up.

It is one part of this area that is the focus of this particular campaign. It was originally known as the Edwin Road site but destined to become Hamilton, Warwick and Norcutt Roads.

At the end of the 19th century an R H W Ingram owned a plot of arable land of 4 acres 3 roods 19 perches that lay between Edwin Road and the railway. This area corresponds to that on which Hamilton, Warwick and Norcutt Roads now stand. As early as 1899 discussions where taking place with the Council who were looking at the possibility of purchasing the land for the erection of 139 working class houses with rents of 8s 6d, 7s and 6s 6d per week. The Council however, were unable to obtain a suitable loan to purchase the site for the proposed sum of £2,500 or £500 per acre. 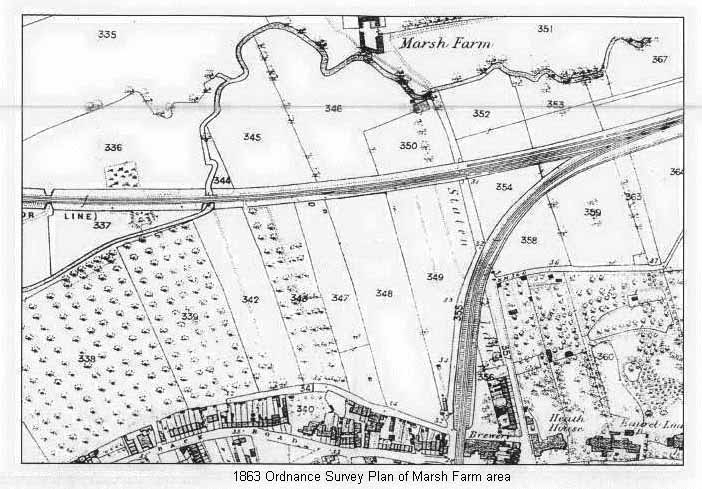 In 1901 the Council were again approached by the new owners of the land, Edmondson Electricity Corporation explaining that they only required one acre and wondering if they would like to buy the remaining 4 acres so that they could build workman’s dwellings. Although the Council spent some time discussing the possible purchase the offer was again turned down. This decision resulted in the resignation of five members of the Housing of Working Class Committee.

Edmundsons Electricity Corporation was formed in April 1887 as a successor to Edmundson Ltd whose first central generating station began operation in Shrewsbury in 1895. By 1940 Edmundsons had become the largest electricity undertaking in the United Kingdom.

The electricity station was started in November 1901 and by May 1902 the new buildings were well advanced and the boilers and plant in place. It had chimneys more than a 100 feet high and the coal for its boilers was delivered by the railway that runs along the north side of the site.

Public supply to the Borough was begun on 21st July 1902, although the complete works had not been finished, and had some 3,000 lights connected to it although it was anticipated that at least one million customers would eventually be supplied. Among those to be supplied were all the houses built on the Edwin Road site proving that ‘light can be brought within the reach of the poor man’s pocket.’ (Richmond & Twickenham Times 19th July 1902)

Hamilton and Warwick Roads, or to give them their original names Athelstan and Algar respectively, were built with one end adjoining the electricity site. There is no clear indication why the names of the roads were changed but it appears to have happened in1907/08. Part of this site is currently an electricity sub-station and the other butting on to Hamilton Road is the area destined for re-development.

The houses were built in the row-style with every sixth house detached. When built they consisted of a front room approximately 11’ x 10’,a back room 14’ x 9’ off which was a kitchen 8’9 x 7’3, and there was also an outside toilet and coal shed. Upstairs were three bedrooms approximately 13’ x 10’, 11’ x 9’ and 8’6 x 6’ 9 and each house had a small walled garden at the rear. The front and back rooms along with the main and middle bedrooms all had small fireplaces. It would not have been unusual for two families to share the house, with the family upstairs using the fireplace for cooking.

It is recorded that numbers 18 – 23 Hamilton Road were built between 1901/02 and were owned by the same people – local builders John James Driver and Harry Albert Ladd of 50 Orchard Road St Margarets. They were trading at this address until 1908. Research would indicate that in 1901/02 the builders did not own the land but only leased it from a Jonathan Donald, an Architect of Wandsworth. It was not until the 1950s when the builders’ families bought the leases.

In the early 20th century Hamilton Road in particular was to acquire a very unsavoury reputation being referred to locally as ‘Hamilton Smacks’ and an area known to the police, who would not patrol other than in pairs.

The land to the west of Talbot Road was farmland and market gardens owned by the Pouparts of Marsh Farm. They provided the rest of London with fresh fruit and vegetables and were also famous jam makers. The fields where Hamilton and Warwick Road now stand were used for playing football. Once a year a very famous circus came to town called Sanger’s and set up camp on what is now Craneford playing fields. The spectacular procession of animals and performers was as long as a mile. They travelled up and down the country but were originally from Newbury. There are lots of references to their show on the Internet and photographs in the Theatre Museum though sadly there are no records of their visits to Twickenham. However in the archives of the Richmond & Twickenham Times it is mentioned that in 1902 they set up camp on the Old Deer Park.

Can you imagine how wonderful it must have been for the children of Talbot Road to see this circus coming to town and camping just over the railway line from their cottages?

Arrival of the Electricity Works

Eventually after much thought, the local council accepted an offer to have electric lighting from one the many Electric Companies that had approached them. It took many years to make this decision as the cost of having electric power instead of gas was very expensive and difficult to justify in an area that was mostly farmland.

The Twickenham and Teddington Electric Supply Company bought the land west of Talbot Road off Pouparts to build the works. They began in November 1901 in the year of Queen Victoria’s death and the plant and boilers were delivered the following May. Electricity was first supplied in July 1902. In the first few days, it was supplying electricity to some 3,000 lights but was expected to eventually cope with a quarter of a million lights.

A reporter from the R & T Times who visited the new works said: “The building which, extensive though it is now, is nothing near the size the company hopes it will eventually assume, is being built by Mr T J Messom”.

Thomas Joseph Messom, builder and undertaker from Grosvenor Road, Twickenham, was also responsible for carrying out the renovation work on the Twining property Dial House when it was converted into a vicarage in the 1890s. It is interesting to note that this local builder was also contracted to build a very fine prestigious house in fashionable Mayfair known as 31 Green Street. This house was designed by Sir Robert Edis and built between 1891 and 94 for Viscount Chelsea, son of the 5th Earl of Cadogan.

In comparison to this elegant house, the Electricity Works were very frugal in design, The same reporter who visited them quotes: “The rest of the available space is occupied by offices and whilst it cannot be said that money has been wasted on a lavish scheme in this direction, there is a pleasing business-like air about the whole place which plainly shows the class of men who have in hand the task of supplying electricity to Twickenham, and further betokens that they will acquit themselves well of their task.

Mr T J Messom was a versatile man and he has left his creative mark with the carved red brick aprons on the window sills of the buildings.

The Electric Company had bought more land than they needed so they sold the surplus to a local builder and subsequently Hamilton and Edwin Roads were built. A reporter for the Richmond and Twickenham Times wrote that at the time the works began generating, “it is a noteworthy fact that the whole of the new cottages near the works…are to be wired, this proving that the light can be brought within the reach of the poor man’s pocket”.

So the Hamilton Road cottages were built with an electricity supply whereas Talbot Road and most other roads at that time were still using gas lamps. Some houses in Talbot Road still have the original gas lamp fittings.

The Works were now supplying a much wider area including Hampton, Hampton Wick and Teddington and needed to expand their buildings. They had been designed so that they could be added onto if the need should arise. The increase in the buildings is evident by comparing the OS maps of 1915 and 1934. There was at least one large chimney rising to 110 feet and possibly another one.

Residents in Talbot Road were now working for the Electricity Company and there used to be an entry next to 47 Talbot, which led straight into the factory. The foreman owned No 45, which was a detached house, and he used to clock the workers in and out.

This must have been a very close community and there is a rare photo of Talbot Road celebrating Queen Victoria’s Diamond Jubilee on 22 June 1897 (below). There are small flags strung across the road and the children are wearing their Sunday best. Of course this was a few years before Electricity came to town and if you look carefully at the photo, you can see the one gas lamp that lit that end of the road. 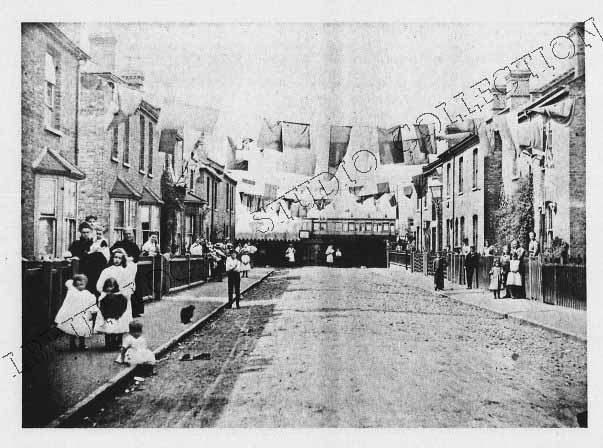 In 1931 the council declared that all the remaining gas lamps in the borough should be converted to electricity.

Over the years as science and industry progressed, there was no need for the works to be so large and the main buildings were in effect cut off across their back and bricked up using whatever was cheap at the time – breeze blocks and corrugated steel. Their present size however is pleasing and they make an attractive cluster, completely complementing not only each other but also the cottages and terraces in the surrounding area.

In 1983 the buildings were awarded a Townscape Merit by Richmond Council.

There are scant references to the old Electricity works and no photos to date. Yet they are as important to Twickenham as many of the elegant listed houses are. Those works provided the borough with power. They gave something to the community – a valuable service. They are unique to Twickenham. They are still standing, adored by everyone who lives close by and they should be preserved as part (the only part) of Twickenham’s industrial heritage.

More historical background to the Electricity Works can be obtained from Richmond Council by clicking here. This document represented part of the application for Conservation Area status.

Hamilton Road and the Electricity Works used as a Film Location

Over the years, several companies have used this area for filming.

This is probably due to the fact that many of the cottages still have the same appearance as when they were built despite the modern touches of double-glazing etc. There are nooks and crannies everywhere that are still original.

The Electricity Works was used as a film location in the mid eighties by a company advertising bread. The bread was only sold in the North of England and therefore the ‘ad’ would not be shown ‘down South’. The action consisted of half a dozen men coming out of one of the upper doors at the front of the building and marching down the steps – as if they were factory workers leaving work and going home for their tea.

The site was also used for an episode of ‘The Bill’ and I have been told by residents that the crew and actors spent most of the day in Hamilton Road while scenes were being filmed.

Hamilton Road was used as a location for a McCain oven chips advert which involved a man parking his Rolls-Royce and going into one of the houses to visit his mum.